In 2018 we completed works on Heathrow Airport Terminal 4 as part of a massive contract to deliver internal surfaces for 2 hotels. Read all about it here.

Update November 2021: You can view photos and more about our work from this massive project at Heathrow Airport Terminal 4 on our new, dedicated commercial surfaces website here:

Here at Marble and Granite Designs, we have been involved in a project to help build a new hotel in the biggest airport in Europe at Heathrow: Heathrow Airport Terminal 4. Within the hotel grounds there are two sides, Holiday Inn Express (HIX) and Crowne Plaza (CP). 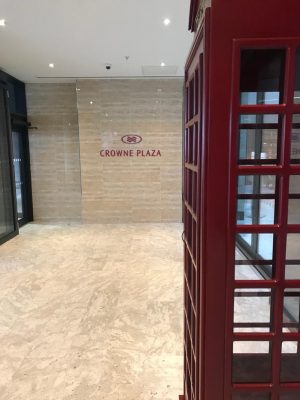 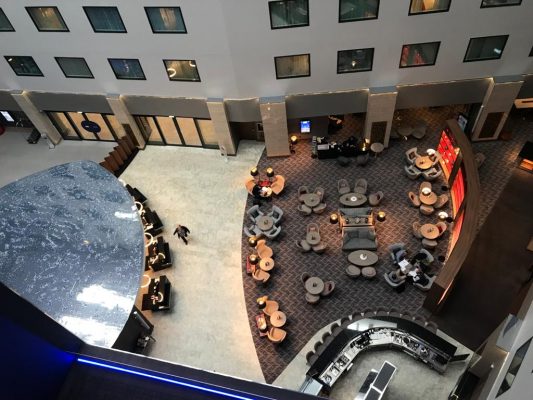 Dining and seating in style at Heathrow Airport Terminal 4 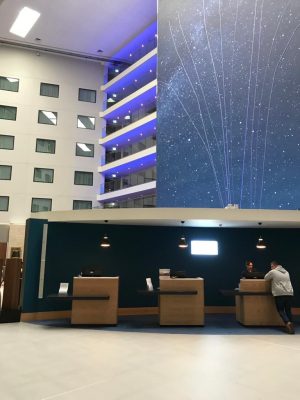 The Crowne Plaza works consist of a mixture of marble and granite surfaces that we supplied, fabricated and fitted: Crema Unimarble from Brachot and the beautiful Natural granite Antique Brown were used in the bathrooms, alongside River White in the hotel bedrooms.

The Holiday Inn Express has the Crema Unimarble.

This material was used for Vanities and Thresholds for the bathrooms. The vanities were mitred (joined at a 45 degree angle) to give a clean, crisp, seamless look with minimal visible joint lines.

The Crowne Plaza rooms were fitted with the beautiful Antique Brown for the Vanities, thresholds, floor tiles, shower plinths and towel holders. The result is a spectacular, inviting and upmarket look and feel that is in line with the customer experience from the overall hotel.

Also, within the bedrooms we fabricated the natural stone granite River White for the luggage racks, bedside boxes as well as the dresser tops. These are important details that add elegance and durability to the hotel rooms.

Speaking about the choice of materials, our MD said:

These colours that our client has chosen for use in this hotel are a great option, adding beauty and simplicity but also practicality. The colours enable each room to have it’s own unique appeal, since each surface is cut from natural stone slabs that never repeat.

With this huge project coming to an end at Heathrow Airport Terminal 4, we have used over 250 tonnes of stone for Vanity tops, Floor tiles, Bedside boxes, Luggage racks, bath panels, cistern panels and shower plinths throughout.
Following on from this we have accepted the new contract to help build another hotel in Heathrow due to start in October 2018. 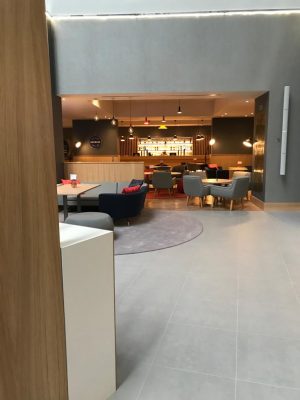 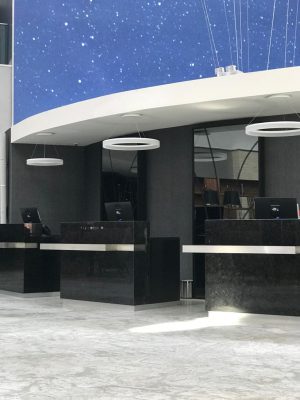 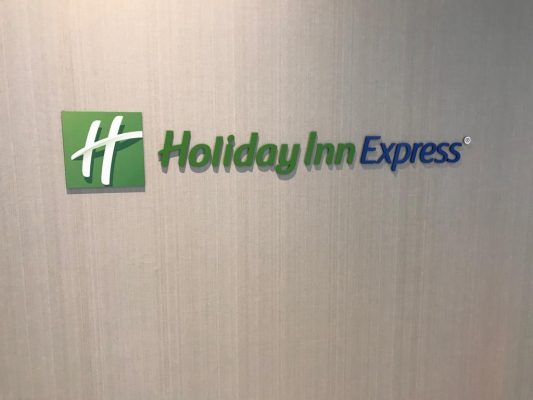 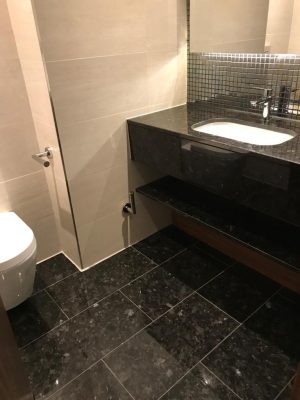 The terminal was initially designed as a facility for short-haul ‘point-to-point’ traffic, to compensate for its relatively long distance from the airport’s central terminal area (CTA). The layout of the terminal, with passenger boarding gates very close to the check-in and security halls, was designed to facilitate rapid movement of passengers through the building (a requirement for short-haul, business-focused flights).

All SkyTeam members with operations at Heathrow fly from Terminal 4, with the exceptions of Middle East Airlines and Delta Air Lines which use Terminal 3. The latter vacated to Terminal 3 on 14 September 2016 to ease connections with partner Virgin Atlantic.

Terminal 4 is accessed from Junction 14 of the M25 motorway via the A3113 and then the Southern Perimeter Road. It is also accessible from Central London via the M4, exiting at Junction 3. There is a short stay car park directly opposite the terminal and a long stay car park on the other side of the twin rivers.

Marble & Granite Designs is a leading independent supplier of natural & engineered stone worktops and custom products for the trade, commercial and residential sectors.

Most viewed posts
Archives
This site uses cookies to offer you a better browsing experience. By browsing this website, you agree to our use of cookies.
More info Accept